On this very date a scant fifty years ago, the Monkees saved the world.  If you were around back then, you might not remember the evil Wizard Glick's plan to use the hypnotizing power of the stranded alien Frodis to brainwash the people of earth via television.  Clearly, you were zoned out by those alien airwaves as the Monkees raced to their local TV studio, battled a two-headed org, and ultimately helped the Frodis recharge its powers and save the world.  Don't worry, that's an understandable lapse in memory.

Yes, today marks the anniversary of The Frodis Caper (aka 'Mijacogeo'), the final first-run episode of The Monkees.  Anybody that knows me for 10 minutes or so knows that I'm a huge, lifelong fan of the Monkees.  I've contextualized my love of the Monkees on this and other blogs, not to mention public talks and performances around Phoenix, so I won't bother recapping how theirs was the first TV show I ever binged, the first albums I ever bought, or the first concert I ever attended.  No need to repeat myself, time and time again. 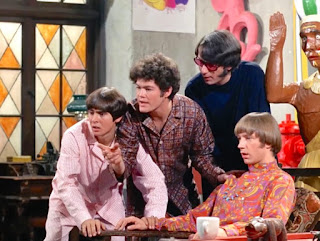 While I'm a much bigger fan of their music than their TV show, The Frodis Caper is a close second to the cult-classic movie Head on my favorites list of their on-film appearances.  It's a fun, remarkable snippet of their history for many reasons, all of which inform my creative process to this day.  If may indulge a few of those reasons, I hope this post will be the first in a new series about things that inspire me, and accordingly the self-publishing of my minicomic Amazing Arizona Comics.

Firstly, The Frodis Caper marks the return of "The Monkeemen," the Monkees' infrequent superhero secret identities.  Of course the plot of an evil wizard would demand superhero action, but just as quickly as the guys try to don their costumes, they're foiled by a new law that prevents changing in phone booths.  Later, they consult the Monkeemen Manual, in its first and only appearance in Monkee-lore.  I just love this stuff, because it jabs at that old phone booth Superman trope, and it also inadvertently mocks the future "super-suit guidebook" detail from another favorite TV show, The Greatest American Hero.  If I ever write Monkees fan fiction, I just might imply that the Monkees super-suits (which, upon inspection, look a lot like Ralph Hinkley's tights) come from the very same aliens! 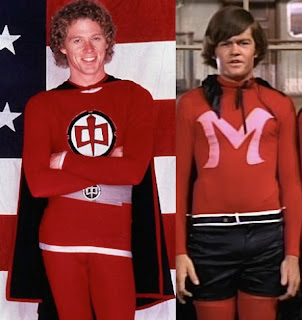 Secondly, the actual "caper" is a nefarious meta-message about the Monkees' very influence on America's youth.  Just as Glick hoped to brainwash the world with televised hypnosis, the harshest criticism about the Monkees was that they had done just that, bypassing usual music industry methods of promotion and delivering their music directly into homes with their show, boosting record sales.  Now, it is the industry standard to release multimedia prior to or alongside a record's release, but, in the '60s, critics and purists thought the Monkees perverted the process by skirting radio's monopoly-influence over popular music.  So, it makes sense that this would be the guys' last TV episode.  By defeating the wizard Glick, they defeated themselves, too! 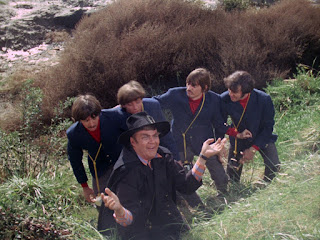 Finally, The Frodis Caper was co-written and directed by Monkee Micky Dolenz.  At that point in their careers, the Monkees seized a little more creative control over their media, and the guys tried to transform the show into something more representative of their tastes.  Guest segments, like this episode's acoustic performance by Tim Buckley, teased the idea of a variety hour that never came to pass.  Yes, the last segment in the Monkees' ongoing series didn't even feature a Monkee!  As they gained more control over their careers, they became more apt to share their spotlight, from Jimi Hendrix on stage to Frank Zappa on screen.  The Monkees didn't present morals at the ends of their shows, like my other favorite franchise He-Man and the Masters of the Universe, but closing this last episode with a friend's work speaks way louder than any cheesy one-liner ever could. 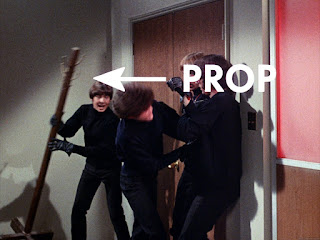 The Frodis Caper is a fan-favorite for its blatantly obnoxious use of quick cuts, non sequiturs, and general self-awareness as a TV show for kids.  Micky presents the possibility of the Monkees as a band that knows they're in a television show, which would make for many more amazing conceptual episodes, if this wasn't their last.  In their '90s reunion special, Davy does turn off the laugh track with a switch hidden in the wall of their pad, so this theory stands!  Just imagine a Monkees story that establishes their on-screen personas as separate identities from the actual four actors/musicians that played them, perhaps on a parallel earth stuck in the '60s.  Those Monkees could still be romp-stomping, reality-bending, struggling musicians, as their fans forever watch from the earth where the real Monkees grew up and became true legends -- a Frodis caper that still captures our attention to this very day.

Blogger's Note:  This website has some great notes and research on The Frodis Caper, and practically all of the Monkees' stuff.  Check it out!
Posted by KaraokeFanboy at 3:24 PM No comments:

The end of August was busy with preparations of Phoenix's Jack Kirby birthday celebration, but now that we've honored the King, I'd like to acknowledge another cool, creative person that just recently passed away -- Jay Thomas.

Jay is best known for his roles on Mork & Mindy, Murphy Brown, and Cheers, but I knew him best for throwing a football at a meatball on The Late Show with David Letterman every Christmastime.  In 2016, I wrote an article for Nerdvana Media about what the tradition meant to me, and much to my surprise, Jay actually read it!  One of his producers contacted me about talking to Jay on his Sirius XM radio show, and I was elated at the opportunity.

I'm sure I posted the interview here then, but I'm re-posting now so you can hear how gracious Jay was. Jay was a wry, tongue-in-cheek comedian, but he was kind and genuine with me.  He let me talk about Letterman and plug my stuff, which was a Christmas gift I'll never forget.  To Jay -- and his staff at the radio station -- thank you. We'll miss you, you hippie freak.

Posted by KaraokeFanboy at 9:00 AM No comments: 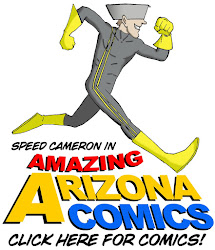 This Is Phoenix Tonight!